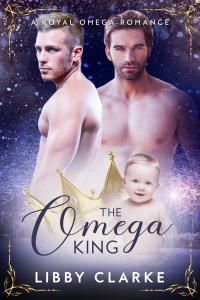 He was never meant to be King.

When tragedy strikes the Royal family of Devaux, the country of Allard is reeling. Their King—and Alpha—has died in a plane crash with no heirs and the next in line for the throne is his younger brother.

Prince Adrian never expected to lose his brother—let alone rule his country. He’d always been content as the second son, he never wanted power, he was happy being a valued member of his brother’s court without the responsibilities of ruling. But now, he has no choice but to step up and be the kind of King his beloved brother would be proud of.

There’s just one problem: Adrian is an Omega and it’s been generations since Allard has been ruled by an Omega King. The old-fashioned, rigid parliament laws state that an Omega can only wear the crown if they have an Alpha Consort.

To rule, he must marry.

Marriage and children have always been far off in Adrian’s plans, but now, if he wants to keep the throne from his conniving extended family, he must find an Alpha to marry and produce an heir to secure the Devaux line before parliament—or his greedy cousins—make a move.

Determined to do his duty, Adrian arranges for the most eligible noble Alphas from across Europe to attend a ball at the Winter Palace. He thinks he’ll find someone—maybe a Duke or a Count—who is willing to be a dutiful husband while understanding Adrian will never be a typical Omega.

But Adrian never expected him.

When Callum Forsythe, the 15th Viscount of Roebuck arrives at the Winter Ball, Adrian is shocked. Years ago, the two butted heads at the same posh boarding school. Now his boyhood rival is all grown up and then some. The animosity—and heady attraction—that simmered years before bubbles over when the two are face to face again.

But Callum is the kind of Alpha who demands a true partner in all ways. He won’t be ruled—not even by his King. Can Adrian let go of his fears and let his heart rule over his head, just this once?

This sweet and steamy MPreg novel has it all: modern royal intrigue, plots against the crown, royal weddings, royal babies, a hot-as-hell Alpha and a sweet and sassy Omega!